It is possible to download and install rules manually, but there is a much easier and quicker way to do so. There are special programs which you can use for downloading and installing rules. There is for example Pulled Pork and Oinkmaster. In this documentation the use of Oinkmaster will be described.

Oinkmaster has to know where the rules an be found. These rules can be found at:

open oinkmaster.conf to add this link by entering:

Place a # in front of the url that is already there and add the new url like this: 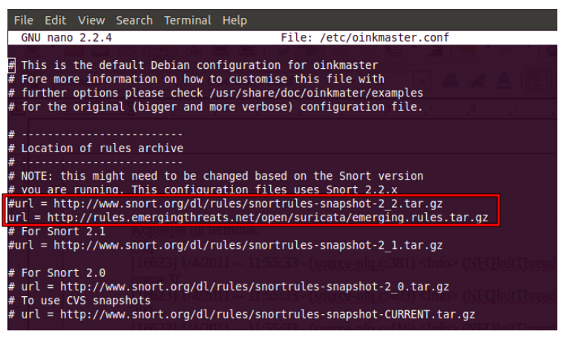 The next step is to create a directory for the new rules. Enter:

In the new rules directory a classification.config and a reference.config can be found. The directories of both have to be added in the suricata.yaml file. Do so by entering: 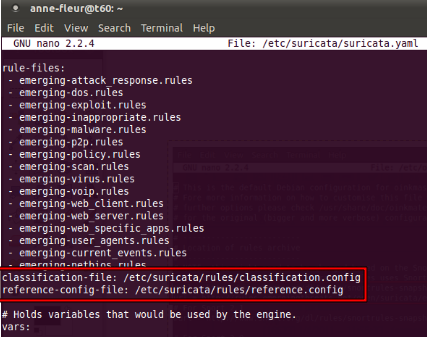 To see if everything works as pleased, run Suricata:

You will notice there are several rule-files Suricata tries to load, but are not available. It is possible to disable those rule-sets in suricata.yaml by deleting them or by putting a # in front of them.
To stop Suricata from running, press ctrl c.

Emerging Threats contains more rules than loaded in Suricata. To see which rules are available in your rules directory, enter:

Find those that are not yet present in suricata.yaml and add them in yaml if desired.

You can do so by entering :

If you disable a rule in your rule file by putting a # in front of it, it will be enabled again the next time you run Oinkmaster. You can disable it through Oinkmaster instead, by entering the following:

and find the sid of the rule(s) you want to disable.

and go all the way to the end of the file.
Type there:

Instead of 2010495, type the sid of the rule you would like to disable. It is also possible to disable multiple rules, by entering their sids separated by a comma.

If you run Oinkmaster again, you can see the amount of rules you have disabled.
You can also enable rules that are disabled by default. Do so by entering:

In this directory you can see several rule-sets
Enter for example:

In this file you can see which rules are enabled en which are not.
You can not enable them for the long-term just by simply removing the #. Because each time you will run Oinkmaster, the rule will be disabled again.
Instead, look up the sid of the rule you want to enable. Place the sid in the correct place of oinkmaster.config:

do so by typing:

Instead of 2010495, type the sid of the rule you would like to to enable. It is also possible to enable multiple rules, by entering their sids separated by a comma.

In oinkmaster.conf you can modify rules. For example, if you use Suricata as inline/IPS and you want to modify a rule that sends an alert when it matches and you would like the rule to drop the packet instead, you can do so by entering the following:

At the part where you can modify rules, type:

Rerun Oinkmaster to notice the change.

If you have already downloaded a ruleset (in the way described in this file), and you would like to update the rules, enter:

It is recommended to update your rules frequently. Emerging Threats is modified daily, VRT is updated weekly or multiple times a week.