Flowbits consists of two parts. The first part describes the action it is going to perform, the second part is the name of the flowbit.

There are multiple packets that belong to one flow. Suricata keeps those flows in memory. For more information see suricata.yaml.
Flowbits can make sure an alert will be generated when for example two different packets match. An alert will only be generated when both packets match. So, when the second packet matches, Suricata has to know if the first packet was a match too. Flowbits marks the flow if a packet matches so Suricata 'knows' it should generate an alert when the second packet matches as well.

Flowbits have different actions. These are: 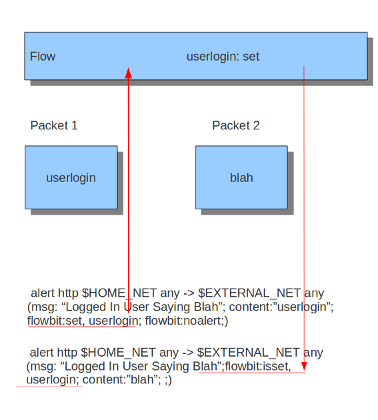 When you take a look at the first rule you will notice it would generate an alert if it would match, if it were not for the 'flowbits: noalert' at the end of that rule. The purpose of this rule is to check for a match on 'userlogin' and mark that in the flow. So, there is no need for generating an alert.
The second rule has no effect without the first rule. If the first rule matches, the flowbits sets that specific condition to be present in the flow. Now with the second rule there can be checked whether or not the previous packet fulfills the first condition. If at that point the second rule matches, an alert will be generated.

It is possible to use flowbits several times in a rule and combine the different functions.

So with the flow keyword you can match on:

NOTE: from_server and to_client are the same, and so are to_server and from_client. This comes from the original Snort language and we support it for compatibility reasons.

These options can be combined. You can use up to three options. For example: 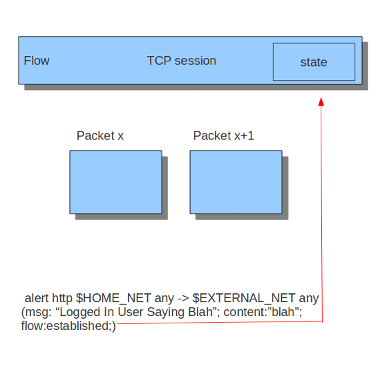 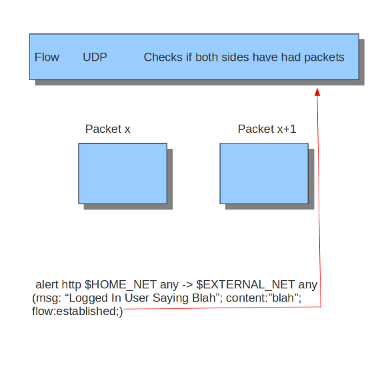 The stream size option matches on traffic according to the registered amount of bytes by the sequence numbers.
There are several modifiers to this keyword:

Example of the stream-size keyword in a rule: