Signatures play a very important role in Suricata. In most occasions people are using existing rulesets. The most used are Emerging Threats, Emerging Threats Pro and source fire's VRT. A way to install rules is described in Rule Management with Oinkmaster.
This Suricata Rules document explains all about signatures; how to read-, adjust-and create them.

A rule/signature consists of the following:
The action, header and rule-options.

Example of a signature: 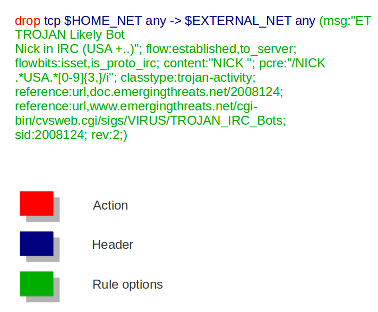 For more information read 'Action Order' in the suricata.yaml wiki.

In this example the red, bold-faced part is the action.

This keyword in a signature tells Suricata which protocol it concerns. You can choose between four settings. tcp (for tcp-traffic), udp, icmp and ip. ip stands for 'all' or 'any'.
Suricata adds a few protocols : http, ftp, tls (this includes ssl), smb and dns (from v2.0). These are the so-called application layer protocols or layer 7 protocols.
If you have a signature with for instance a http-protocol, Suricata makes sure the signature can only match if it concerns http-traffic.

In this example the red, bold-faced part is the protocol.

In source you can assign IP-addresses; IPv4 and IPv6 combined as well as separated. You can also set variables such as HOME_NET. (For more information see 'Rule-vars' at Suricata.yaml in the user guide.)
In the Yaml-file you can set IP-addresses for variables such as EXTERNAL_NET and HOME_NET. These settings will be used when you use these variables in a rule.
In source and destination you can make use of signs like ! And [ ].

Pay attention to the following:

If your settings in Yaml are:

HOME_NET: any
EXTERNAL_NET: ! $HOME_NET
You can not write a signature using EXTERNAL_NET because it stands for 'not any'. This is a invalid setting.

Example of source and destination in a signature:

The red, bold-faced part is the source.

The red, bold-faced part is the destination.

Traffic comes in and goes out through ports. Different ports have different port-numbers. The HTTP-port for example is 80 while 443 is the port for HTTPS and MSN makes use of port 1863. Commonly the Source port will be set as 'any'. This will be influenced by the protocol. The source port is designated at random by the operating system. Sometimes it is possible to filter/screen on the source
In setting ports you can make use of special signs as well, like described above at 'source'. Signs like:

Example of ports in a signature:

In this example, the red, bold-faced part is the port. 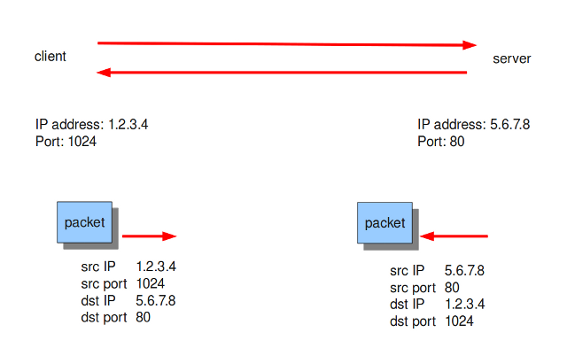 In this example there will only be a match if the signature has the same order/direction as the payload.

Example of direction in a signature:

In this example the red, bold-faced part is the direction.

Keywords have a set format:

Sometimes it is just the name of the setting followed by ; . Like nocase;

There are specific settings for:

For more information about these settings, you can click on the following headlines: