Payload keywords inspect the content of the payload of a packet or stream.

The content keyword is very important in signatures. Between the quotation marks you can write on what you would like the signature to match. The most simple format of content is:

It is possible to use several contents in a signature.

Contents match on bytes. There are 256 different values of a byte (0-255). You can match on all characters; from a till z, upper case and lower case and also on all special signs. But not all of the bytes are printable characters. For these bytes heximal notations are used. Many programming languages use 0x00 as a notation, where 0x means it concerns a binary value, however the rule language uses |00| as a notation.
This kind of notation can also be used for printable characters.

There are characters you can not use in the content because they are already important in the signature. For matching on these characters you should use the heximal notation. These are:

It is a convention to write the heximal notation in upper case characters.

To write for instance http:// in the content of a signature, you should write it like this:
content: “http|3A|//”;
If you use a heximal notation in a signature, make sure you always place it between pipes. Otherwise the notation will be taken literally as part of the content.

It is possible to let a signature check the whole payload for a match with the content or to let it check specific parts of the payload. We come to that later.
If you add nothing special to the signature, it will try to find a match in all the bytes of the payload.

In this example, the red, bold-faced part is the content.

By default the pattern-matching is case sensitive. The content has to be accurate, otherwise there will not be a match. 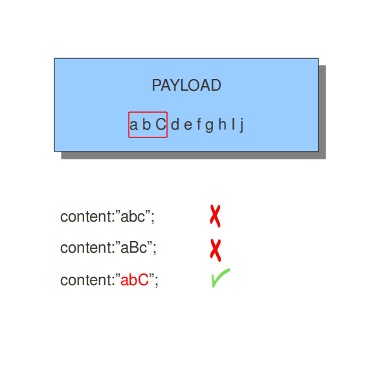 It is possible to use the ! for exceptions in contents as well.

If you do not want to make a distinction between uppercase and lowercase characters, you can use nocase. The keyword nocase is a content modifier.

The format of this keyword is: 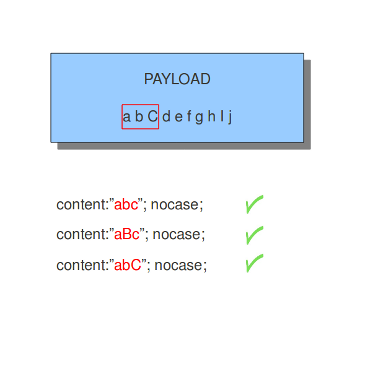 It has no influence on other contents in the signature.

The number after depth designates how many bytes from the beginning of the payload will be checked. 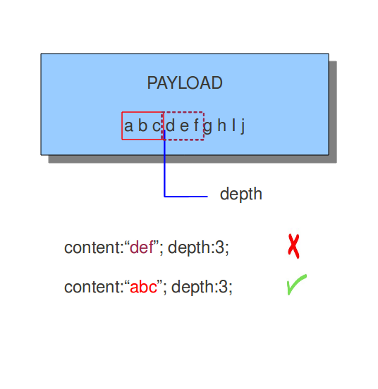 The offset keyword designates from which byte in the payload will be checked to find a match.
For instance offset:3; checks the fourth byte and further. 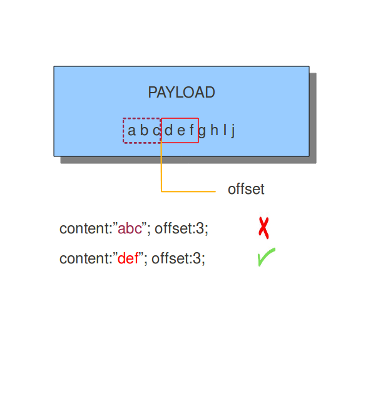 The keywords offset and depth can be combined and are often used together.

If this was used in a signature, it would check the payload from the third byte till the sixth byte. 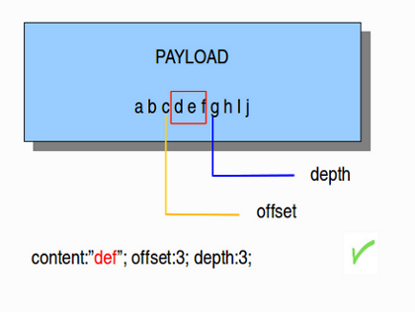 The keyword distance is a relative content modifier. This means it indicates a relation between this content keyword and the content preceding it. Distance has its influence after the preceding match.
The keyword distance comes with a mandatory numeric value. The value you give distance, determines the byte in the payload from which will be checked for a match relative to the previous match.
Distance only determines where Suricata will start looking for a pattern.
So, distance:5; means the pattern can be anywhere after the previous match + 5 bytes. For limiting how far after the last match Suricata needs to look, use 'within'. 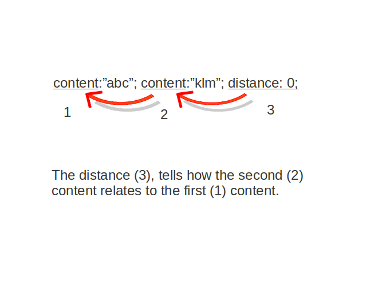 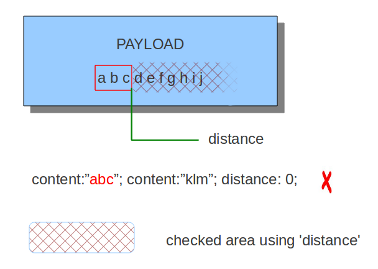 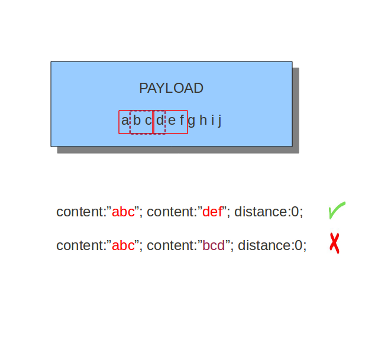 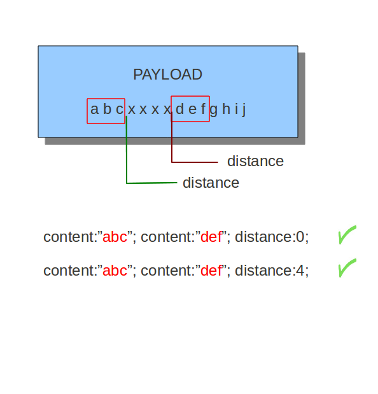 Distance can also be a negative number. It can be used to check for matches with partly the same content (see example) or for a content even completely before it. This is not very often used though. It is possible to attain the same results with other keywords. 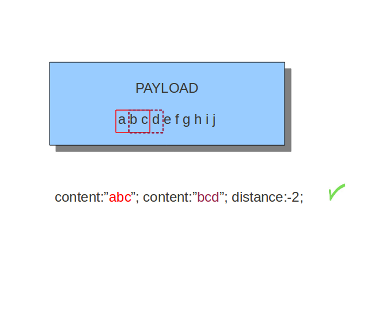 The keyword within is relative to the preceding match. The keyword within comes with a mandatory numeric value. Using within makes sure there will only be a match if the content matches with the payload within the set amount of bytes. Within can not be 0 (zero)

Example of matching with within: 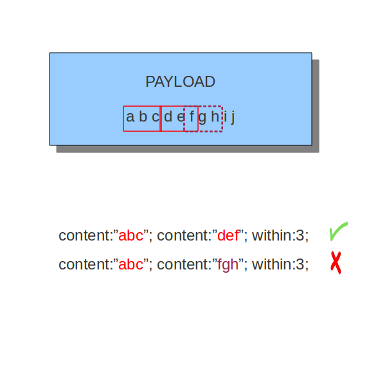 As mentioned before, distance and within can be very well combined in a signature. If you want Suricata to check a specific part of the payload for a match, use within. 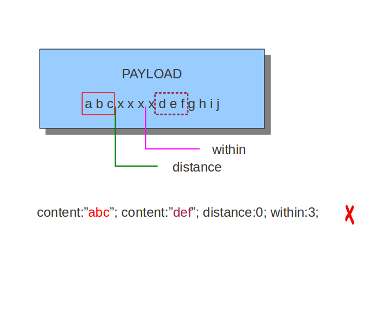 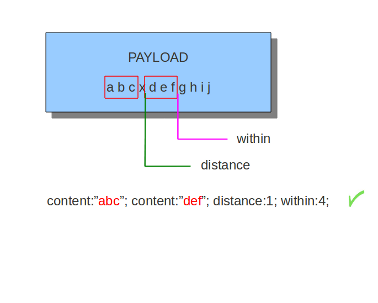 So you can use both examples:

You can also use the negation (!) before isdataat. Suricata does not support using it yet, but will support it in future versions of the engine. For more information see #257. 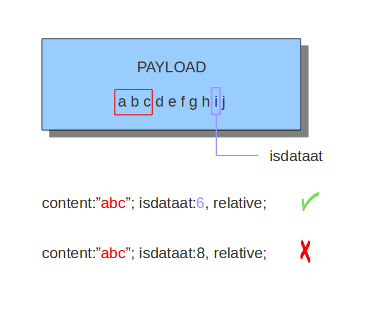 With the dsize keyword, you can match on the size of the packet payload. You can use the keyword for example to look for abnormal sizes of payloads. This may be convenient in detecting buffer overflows.

example of dsize in a rule:

The rpc keyword can be used to match in the SUNRPC CALL on the RPC procedure numbers and the RPC version.

You can modify the keyword by using a wild-card, defined with *
With this wild-card you can match on all version and/or procedure numbers.

RPC (Remote Procedure Call) is an application that allows a computer program to execute a procedure on another computer (or address space). It is used for inter-process communication. See http://en.wikipedia.org/wiki/Inter-process_communication

Example of the rpc keyword in a rule:

The replace content modifier can only be used in ips. It adjusts network traffic.
It changes the content it follows ('abc') into another ('def'), see example:

The replace modifier has to contain as many characters as the content it replaces.
It can only be used with individual packets. It will not work for Normalized Buffers like HTTP uri or a content match in the reassembled stream.

The checksums will be recalculated by Suricata and changed after the replace keyword is being used.